AGFA started manufacturing the PE 46 double play tape in 1968. What we see here is the second generation of this tape from late 70's with completely new aesthetics and a new archiving system. Instead of the usual cellophane packaging these tapes were sold in black cardboard boxes. Inside, each plastic cassette came equipped with connecting wedges for easy storage. Withdrawing the orange-colored wedge and turning it over allowed the user to join several cassettes securely together. Opening the clear plastic door gained acces to the tape reel while the cassette remained secured in line with the other cassettes from your collection.

A major result is that wow and flutter are reduced to a low 0.08% (DIN), 0.03% WRMS. The multi-colored feather-touch IC logic controls only takes the lightest pressure to activate the transport controls. They are direct function change controls, which means there's no need to press the stop button before changing modes. Independent line and microphone recording level controls ensure mixing and recording of microphone and line source signals. ​Frequency response is 30 to 26,000 Hz +/-3 dB at 19 cm/s with a signal to noise ratio better than 62dB. 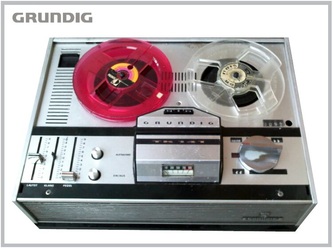 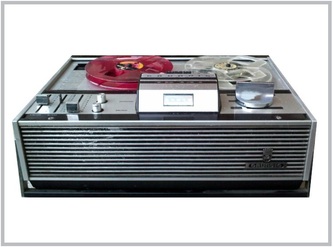 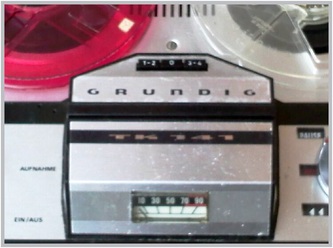 Those were the glory days of GRUNDIG. They had several reel to reel models, such as this TK-141.
This is a mono recorder with 9.5 cm/s speed for a frequency response of 40-12.500 Hz, manual recording level and built in elliptical loudspeaker. Maximum reel size was 15 cm. It was built as a portable recorder with a carrying handle but was only   working from a mains supply.(The play-stop knob is not the original one, but it is from another GRUNDIG machine)

Made in Hungary, the MECHLABOR STM 610 is a 3 motor, 3 head studio reel to reel analog recorder.
This was the most successful model in a long series of tape recorders. Production started in 1976 at "Mechanikai Laboratórium" in Hungary. The STM 610 was the stereo version of the 600 series, running at 38.1 and 19.05 cm/s - and "standing" with a 75 Kg weight. These tape machines were used at the 1980 Summer Olympics held in Moscow, where 2000 units were ordered.
This post was made possible with the help of Mr. Nagy Vilmos, owner of the world largest open-reel tape recorders museum of it's kind. More than 350 reel tape recorders made by 130 companies from twenty countries are exhibited and, all the machines exhibited are in working condition. See the museum...
Most of the information comes from this website, where you can find everything about MECHLABOR Studio equipments. (the site is in hungarian - use the translate button in the low right corner)

This was the first 3 head reel to reel recorder made by PHILIPS for home use. It is a 3-speed model with 19 cm/s (7 1/2 ips), 9,5 cm/s (3 3/4 ips) and 4,75 cm/s (1 7/8 ips) speeds. The monitor switch with its two positions (for source and tape) was labeled simply position A and B. It should be noted that this is a deck (with no amplifier inside) as later PHILIPS models usually had a built in (good) amplifier. For the home recording musician this machine was equipped with "dp" (double play) and "mp" (multiplay) recording system.
These functions allowed to first record one instrument into track one. Then rewind the tape, activate double play and start recording your second instrument. While doing this your first instrument was copied from one track to the another track while recording the second instrument over it. All this time you were able to hear the first instrument while playing your second one for recording. Read here more about the system where this recorder was used. 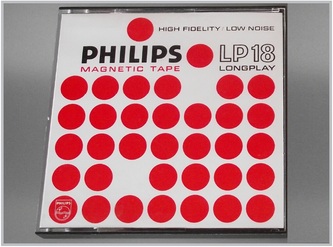 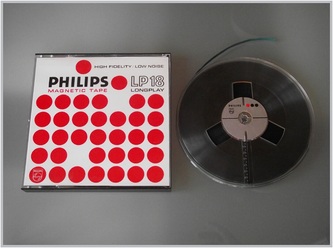 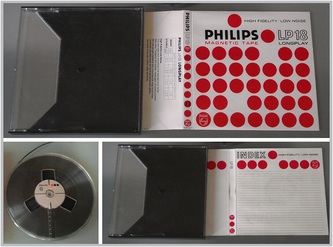 Beautiful package and a good tape from PHILIPS.
The rise in popularity of the Compact Cassette gave the ideea to put the tape reel inside of a plastic box, similar in design to those made for compact cassettes. The transparent cover hinges out and it contains the tape reel and the printed cardboard cover. In this "red dot" box, was the LONGPLAY (LP18) tape on a 18 cm (7 in.) diameter reel. We have a tape that offers a 2 x 45 min. recording time in Stereo when using 19 cm/s (7 1/2 ips.) tape speed. It was called LONGPLAY because usually recordings on "vinyl" were approximately 45 min. (both sides)......and because "vinyl" was called back in those days LP..............LONGPLAY record.
You could have two records in top quality recorded on a tape like this. At a speed of 4.75 cm/s (1 7/8 ips.) recording time increases to 4 x 180 min. in MONO. The tape itself was a "High Fidelity - Low Noise" tape. Between the green and red lead in tape there were 540 m (1800 ft)  of "The new tape with extremely low background noise"

The old Soviet propaganda poster reads: "Soviet man be proud! You opened the road to stars from earth" - so the ROSTOV stereo 105 (Росmов стерео 105) reel to reel tape recorder was born in 1985. Production continued for several years and our model was manufactured in 1987. As far as I know this was the only top model from the USSR that was exported to former east European countries. Overall is a well built and good sounding tape recorder using 3 direct drive motors with electronic control and 3 Glass Ferrite heads.... but it is not a deck. The unit has a built in 15W/ch amplifier with tone controls and source selector so you can hook up a pair of speakers directly to the tape recorder. You can connect two external sources to this amplifier but you can also use this tape recorder connected to a different amplifier too (All connectors are DIN standard). Recordings can be made using 9.5 or 19.05 cm/s tape speeds while the maximum diameter of the accepted reel is 22 cm. (There is a switch at the back to select tape tension for 18 cm or 22 cm reels) Another unusual feature is the red LED that lights up for playback, while for stop there is a green LED. Notice that visually the keypad design is inspired by SONY models from 70's. For private listening sessions there is a headphone socket at the front with a switch to deactivate the loudspeakers. The ROSTOV stereo 105 even though it was a export model, almost all of them had Cyrillic script front panel. The Soviet domestic market model was the ILET-110 (Илеть-110) and some of these models used Cobalt Amorphous heads from TEAC. Frequency response: 31.5 - 22.000 Hz (19.05 cm/s) ​Dimensions: 510 x 417 x 225 mm Weight: 24 kg.
Cover Photo Art: Late Space Age - Published April 15th 2017

The Hi Fi-TG543 (Tonband Geräte) tape recorder was introduced by SABA in 1971. It was a new model for the ambitious tape recordist built as a 4 track 2 channel (STEREO) recorder with a frequency response of 40 - 18.000 Hz at 19 cm/s tape speed. It has a built in 2*10 W amplifier and built-in loudspeakers too. Like with any serious recorder the recording levels could be adjusted separately for left and right channel following the two recording level meters. The tape recorder was delivered with a smoked-transparent removable dust cover for a price of  618 DM in 1971.
Published Octobert 15th 2013

This was the last reel to reel tape recorder manufactured by TESLA (a state-owned company originally named after Nikola Tesla, later explained as abbreviation from technika slaboproudá, which means "low-voltage technology") from the former Czechoslovakia in 1988. The CM 130 presented here, features a built-in 10W/ch amplifier while the CM 170 was a deck only version (identical front layout where the tone and volume control were used for headphone control only). The tape recorder was based on the previous B115 (B116) model (also part of the 1001hifi collection) but it was a simple facelift that consisted of replacing the needle type VU meters with LED VU meters and different front panel graphics. Even though it's a 1988 model the technology incorporated dates back to the late 60s - early 70s. The TESLA CM 130 is using a single motor belt and idler drive mechanism (a lot of them) in a slightly improved version compared to previous TESLA mechanisms that were more problematic. Play, stop and fast winding controls are rotating lever operated, the only "modern" feature being the electromagnet (and remote control capable) Pause button. The whole mechanism is installed on a steel plate that sits inside of a thick and solid plastic frame with removable plastic front and back panel in a relatively service friendly layout. The top part, where the handle is mounted, is actually an extruded aluminium that doubles as heatsink for the built-in amplifier. The plastic used is of a very good quality with components (panels/sliders) fitting precisely in their place and having a basic but nice surface treatment. The smoked front cover has to be removed completely in order to thread a tape. This a 2 channel 4 track Stereo-Mono recorder that could run at both 19 and 9.5 cm/s speeds with reels up to 18 cm. For best performance the CM 130 is using a 3 Head layout with Long Life heads made by TESLA, the AN210 playback head, ANH200 recording head and the ANH220 erase head. The deck was factory adjusted to east German ORWO tapes that were common in the former eastern bloc. A similar tape (featured in the photos) was made in Czechoslovakia by Emgeton.

​The UHER 724 L STEREO reel to reel tape recorder was introduced in 1965. It's a one motor two head recorder with a frequency response of 40-18000 Hz (19.05 cm/s) The whole mechanism is built around a large diecast center piece that offers great stability to the machine. There are a lot of belts and idlers but somehow these components lasted very well and the tape recorder still operates impeccably in 2016. The tape recorder has built in loudspeakers and amplifier but the sound is only modest. You can connect external loudspeakers to the tape recorder but there is still very little improvement in sound quality. You need to connect the tape recorder to an external amplifier (like the NIKKO TRM-800 I'm using) to release the full potential of this recorder.
Published December 15th 2016

UHER was very famous for their "4000 Report" series of portable reel to reel recorders. They were extremely reliable with a very good sound quality; a very high build quality and they were not as expensive as other (Swiss) machines. This recorder on the other hand was their smallest machine for domestic use that also has a very high build quality. This is a STEREO tape recorder, but it has only one VU meter that operates only in recording mode. It can record with two speeds: 19 cm/s (7 1/2 ips) and 9.5 cm/s (3 3/4 ips) using a recording head made by WOELKE, a well know german company from München. The recording level can be manually set and there are a pair of built-in speakers for monitoring. Here are some technical details: frequency response is 40-20.000 Hz using 19 cm/s with a dynamic range of 61 dB, one motor only, power output for the built in or an external loudspeaker set is 2 x 4 Watt Sinus and the maximum reel size is 18 cm (7 in.)
​